Uzbekistan is the former Soviet republic with the ancient history which was the part of the famous Silk Road time ago. The country has a variety of rocks and structures, most of which are not suitable for permanent residence -steppes, mountains and deserts. The most habitable areas are the rivers and the land around them. The country climate is continental - dry and hot.

Although Uzbekistan is the country which has over 100 cities and towns, almost all the life there is going in and around Tashkent, Bukhara and Samarkand - the largest cities, the main markets and the unique places to visit.

Tashkent (the capital of Uzbekistan) is most beautiful city in Central Asia, the concentration of the cultural life of the country. Visit the colorful mosaic mosque in Hast Imam complex, Chorsu "bazaar" , the the oldest mosque in the city - Khoja Ahrar Vali, drink tea in a cozy cafe of Amir Timur Square.

Samarkand is considered to be older than Babylon and Rome. The city of Bukhara is also called the "Star of the Islamic World" due to its magnificent mosques - 360 of them! Khiva- founded by the the son of Noah - is placed at the heart of the Karakum desert. Termez - one of the main Buddhist outlets, Kokand, combining Central Asian and Chinese culture, and one of the oldest cities in the world - Shakhrisabz are also the unique places which you must visit during your tour over Uzbekistan land.

The mountains Chimgan is the ski resort in Asia. Chimgan Mountains impress by the picturesque scenery. Climbing there, you will meet Charvak reservoir, Chatkal Biosphere Reserve and Mazarsayskoe Gorge.

The roots of the Uzbek cuisine go into the distant past. Traditional dishes reflect all the old history and culture of the country. Chefs use rice, lamb and beef, vegetables and spices.The Crown of traditional country cuisine is Uzbek pilaf from the fat lamb and rice. It is difficult to imagine Uzbekistan without constant teas - this country thrives a cult of black tea. Sweets from rice or dried fruit are served with hot black tea there. 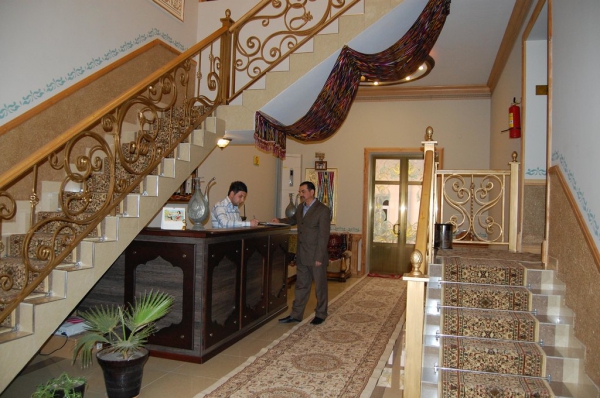